At the end of 2012, Mimaki Japan launched a brand new desktop flatbed printer on the market. Why is it so special? Because it’s using the latest UV LED technology. What are the difference between UV lamp & UV LED? Please check the below photo 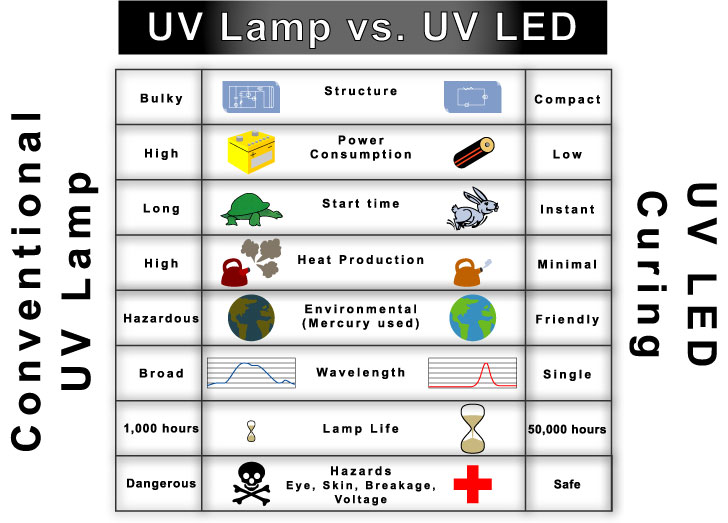 From the comparison photo, we can see UV LED has more advantages than traditional UV lamp. So we believe that UV LED printing technology will be widely used in the digital printing and eventually become the future of digital printing in the following years.

Since there are many customers’ demands for the UV LED printers and it’s a very promising business, many digital flatbed printer manufacturers follow Mimaki steps to develop their own UV LED printers.

As one of the earliest digital flatbed printer manufacturers in China, Acro Enterprise also realized that it’s time to create something new for the increasing market. Our UV LED printer project was settled down at the beginning of 2013. After our R&D team studied a lot of information about UV LED technology, we knew that there were 3 core sections of UV LED system. One is flatbed printer. Second is UV LED. Third is UV ink.

Since we have 10 years flatbed printer manufacture experience, so it’s not difficult to convert flatbed printer into UV LED printer by adding UV LED curing system. Now we focus on the UV LED system & UV inks.

Regarding the UV LED, we knew that Phoseon is the leader of UV LED in USA. So we bought the demo UV LED from them which was using air cooling system. According to their wire diagram, we did install the UV LED into our flatbed printer. Now the UV LED printer is ready. The next step was to install the UV inks into the printer, and test print. Since the UV ink is brand new on the market, so no one knew how it worked.

In order to test our first demo UV LED printer, we did pay a lot of money on developing our own UV LED printer. We collected a lot of testing information and reported to our UV ink supplier, UV LED supplier, even software supplier.